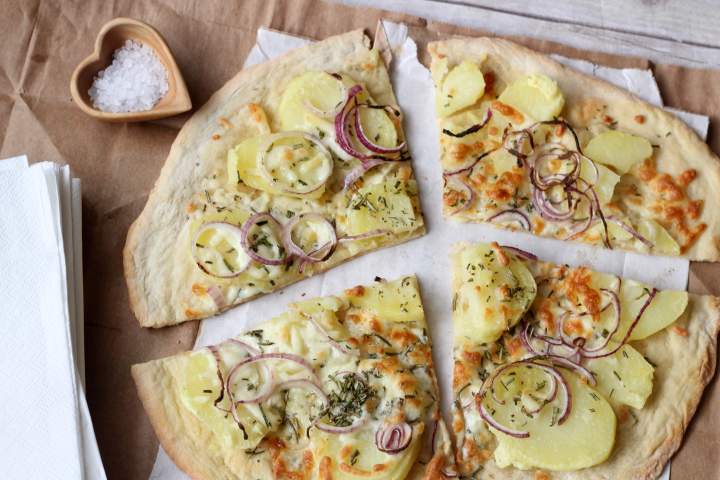 This is a family favourite – the Italian answer to fast food. If you make your own pizza dough, then not such a quick option but there are pretty good pizza bases out there which aren’t bad when you are in a hurry. I’m a make your own girl, just because I like the satisfaction of it. I usually make a big batch which I rollout and freeze between parchment paper until I need them. I lived in Rome for about 6 months and had a few favourite spots for Pizza a taglio. These toppings are both for white pizza’s – no tomato sauce, more typical of Rome than Naples, the potato topping very Roman,the cauliflower less so (ahem, ok not so at sll) but i do love it. The potato is sliced really thin and lots of olive oil and rosemary added before cooking, so so yum.

For each you will need 1 quantity of Pizza dough and which ever topping you prefer.

Chop and mash the garlic and add 2 tbsp olive oil. Tip in to a bowl, add the cauliflower and mix to coat
Tip not a baking tray and cook at 175C until golden and cooked.
Set aside to cool.
Gently fry the pancetta pieces until they are cooked and tip into the cauliflower and season well.
Sprinkle the Parmesan over your pizza base(s) and top with the cauliflower. Sprinkle some olive oil over and cook in the hot oven as instructed below.

Roll out your base, spread the potato slices over it, top with rosemary, onion, salt and pepper and olive oil.
In to the oven as instructed below until crispy and golden brown.
Enjoy, then run out the door and don’t stop until I tell you…..

Sift flour and salt in a bowl and stir in the yeast.
Make a well in the centre and add the water and oil to form a soft dough.
Knead for about 8 mins by hand or using your dough hook on a mixer untilmsmoothnand elastic.
Oil a bowl, tip in the dough and cover with cling nd leave to double in size.
Tip out and divide in 2 if you want 2* 8inch or keep as is for 1 large.
Roll out or if you have the knack, stretch out till very thin.
Cover with your chosen topping and bake in a very hot oven on pizza stone if you have one until crispy and cooked, about 12 -15 mins.