A weekend away in London with a visit to Providores sparked my obsession with these eggs, I picked the brains of a work colleague from Turkey which helped me hone this recipe even more. Apparently there is an old Anatolyian recipe for eggs with Turkish yoghurt, which would never be served with Sourdough toast but believe me it’s all the more yummy with it. The chilli butter has a wonderful nutty undertone with the heat and flavour of the chilli flakes and paprika. A sprinkle of flat leaf parsley and you are good to go. Believe me when I say that this is a really unexpected delicious way to have eggs, after all who would expect that eggs on yoghurt could be so nice but trust me this is really worth trying. My other half calls it a protein blast of deliciousness. 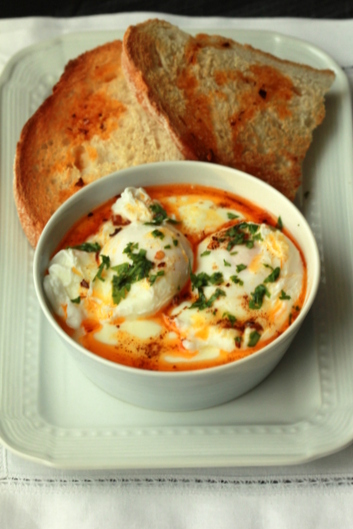 Crush the garlic clove and add them into yogurt with the olive oil and lemon juice. Whisk gently until it is mixed. Season and tip into the serving bowl.
Melt butter in a saucepan, spoon off the foam until you are left with the clear liquid, bring to a high heat then add paprika and chilli flakes to season.
Remove from heat when it sizzles.
In a deep pot, bring water to boil. Add salt and a tbsp of vinegar into the water.
Crack one egg into a small cup and lower the cup into gently simmering water and then gently twist it and turn the egg into boiling water.
Repeat the same for the remaining egg but allow the first one to settle a bit before adding the second egg and don’t add it on top of the first egg.
Cook each egg for about 3-4 minutes until the outer layer becomes opaque and the yolk is still a bit soft, but not too runny.
When you are ready to serve, remove the eggs from the water with a slotted spoon, drain and place them atop the yogurt in each plate. Spoon over the melted butter sauce over the eggs and yogurt and drizzle
any remaining over the sourdough slices. Sprinkle over the parsley and serve immediately.