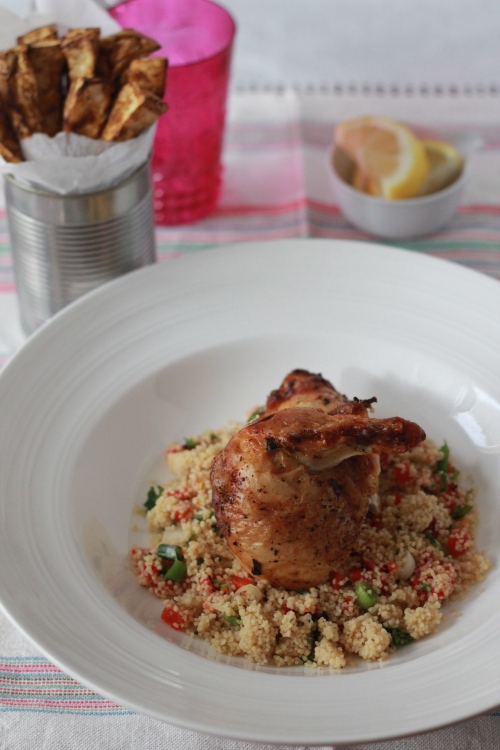 Add a little middle eastern magic with a couscous laced with Sumac complimented by chicken baked with a garlic and lemon marinade, accompanied by celeriac chips- perfect for an easy weekend supper. Marinade the chicken in the morning to save time and add flavour. If you only have boneless chicken then make up skewers and throw them on the barbie or griddle pan instead. Perfect summer eating full of flavour and goodness. Try what I did and say nothing about the celeriac, I just called them chips and they went down a treat.

Combine the marinade ingredients and leave in the fridge at least 3o minutes preferably the day.
Tip out onto a flat baking tray, season and bake until cooked through at 180C – about 30 minutes but check to ensure its fully cooked.
Leave to rest for about 5 minutes.
Portion by cutting through just after the wing, Serve with couscous and celeriac chips on the side.

Pour couscous into a bowl , stir in the sumac and pour over the stock
Stir to combine and cover and leave for about 10 minutes then fluff with a fork.
Stir in the chopped veggies and parsley, season and leave aside until required.

For the Celeriac Chips
1 small celeriac peeled and cut into chips
marinade made from 1 tsp each of cumin, sweet paprika, 1/2 tsp cayenne and celery salt, pepper to season, mixed in 3 tbsp oil
Tip the celeriac chips in, toss well to cover with the marinade then bake at 180 for about 20 minutes until cooked through.